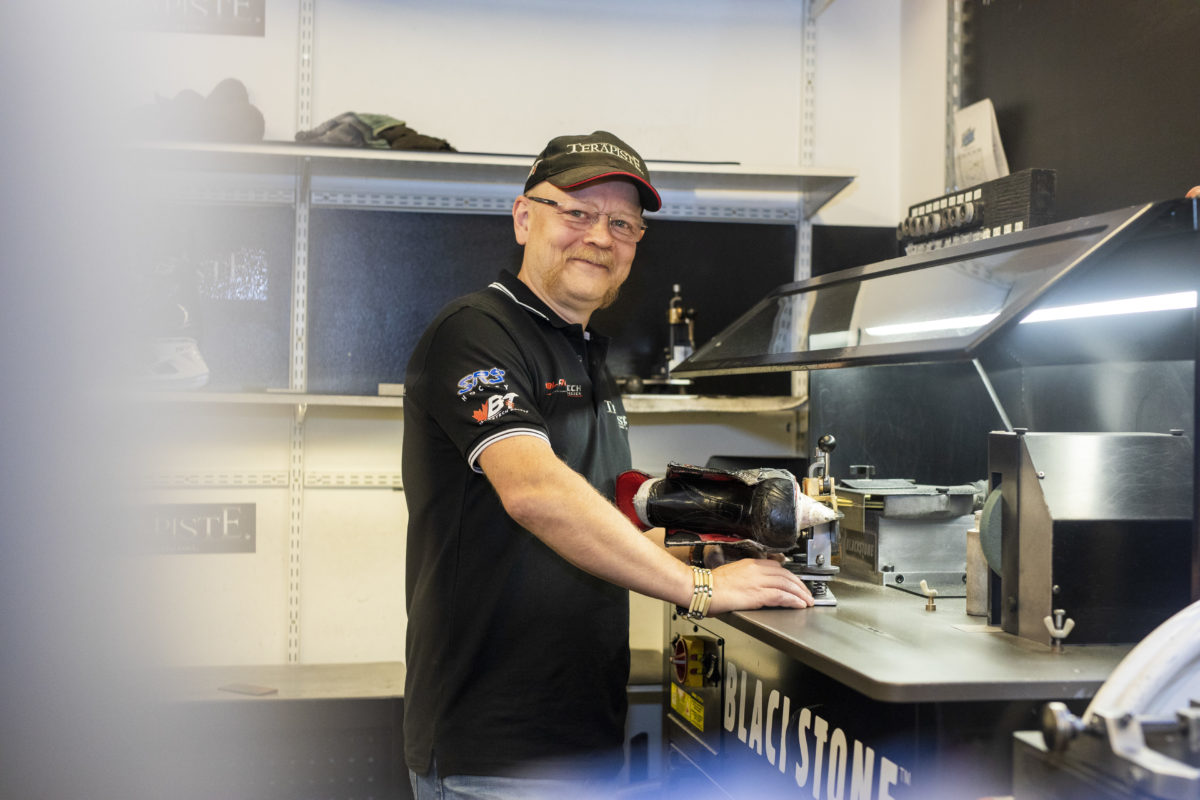 “Each of the brothers in our family has been able to skate as soon as they have put the skates on,” Tide Lehtonen laughs. His first coaching job was at JYP Jyväskylä as the coach of his seven years younger brother team.

If something can be done for a hockey, Tide Lehtonen, the owner of Teräpiste, will do it. If the solution is not ready, Tide will develop it. Persevering and taking care of quality.

Tide Lehtonen has lived his life in the hockey world. Coached for 27 years and still playing recreational hockey. Sold equipment and seen the importance of good equipment. Been a baker for 15 years before the salesmanship.
“Early shifts as a baker made it possible to coach and spend evenings at the ice rink,” he says.
Tide originally became an employee at Teräpiste, located at Malmi Ice Rink. The reputation as a skilled skate sharpener rushed quickly. He and the then owner of Teräpiste, Juha Aalto, wanted to create the best skate sharpening shop in capitol city area, which also has regular opening hours.
As the customers began to ask Tide for help repairing the equipment, he set up the shoemaker’s sewing machine, asked a few tips from the president of the Shoemakers’ Union, and began sewing. He had learned that skill and precision at one time in his father’s factory. The son of a roller blind manufacturer thinks he has sawn “probably a million miles of stitches”.
Teräpiste was acquired by Tide in 2017. 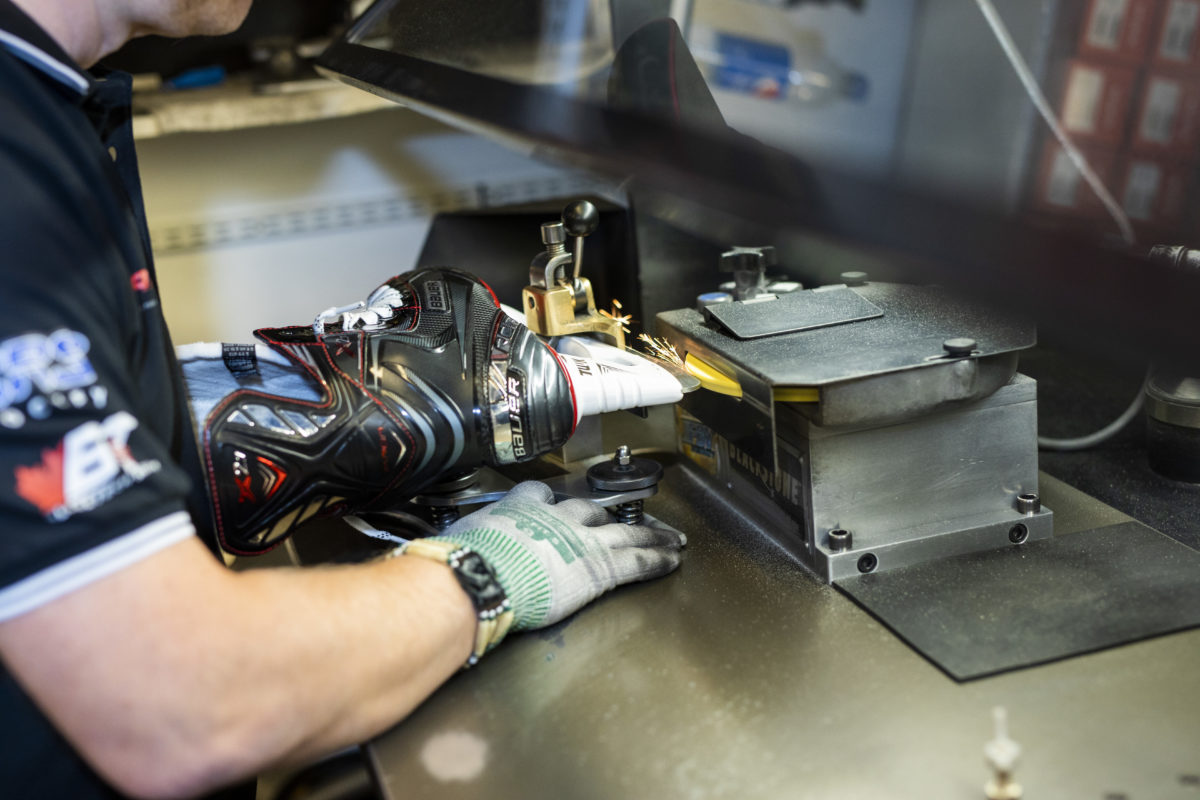 Teräpiste is known for them sharpening skills.

In addition to sharpening, Tide and his skilled workers profiling skate blades to suit the needs of each player.
“The profiling of the blades is a really important thing. The profile is made according to the player’s style of play, one wants agility and the other top speed. ”
Tide also started renting high-quality blades at Teräpiste, as he wanted top-quality blades to be possible for everyone’s wallet.
Now the rental of Bladetech blades is already in full swing at Teräpiste. Bladeflex members receive Bladetech Flex-Force blades and 2-4 sharpenings per month for a low monthly fee. The leasing price for blades alone is 15 euros per month.
Out of the opening hours, the skates to be sharpened can be left in a locked cabinet. They can also be applied for from there, even if the store is not open.
Tide’s shop also sell tapes,laces and other supplies for hockey players. Repairing broken stick shafts and broken stick blades and recycle repaired quality sticks for sale.
Tide has also set up a little hockey museum on the wall of its boutique. The showcase features Lehtonen’s brother trio’s hockey equipment and fondest memories, such as a picture from the late 1970s of the Korpilahti Pyrintö team in his childhood hometown.
Also on display are plastic skates from the early 1980s.
“They cause by far the most debate. Plastic skates were a big fashion at the time and a big step forward. In the past, skates were loose leather skates, they were very hard to ankles. ” 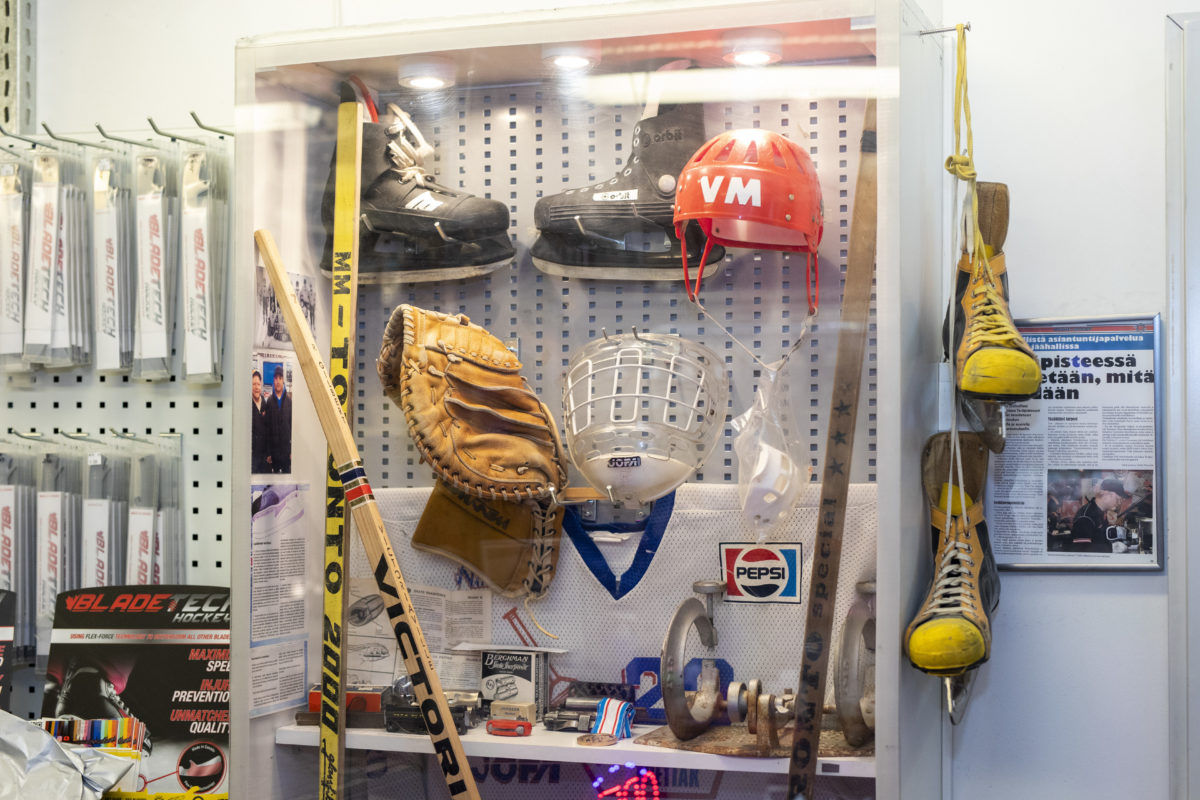 In the showcase, Tide has amassed memories of hockey equipment over the years.

Tide never gets bored talking about hockey. At Teräpiste counter he will be exchanging ideas about both the gear and the sport in general. Junior hockey is also still close to Tide’s heart.
“I’m trying to educate parents and steer them in the right direction.”
Tide has once coached juniors at JYP, HJK, Kiekko-Tiikerit, Grankulla IFK, Viikingit and Red Wings. He coached the women’s teams in EVU and Karhu-Kissat.
When talking to parents, Tide talks about the importance of giving peace of working to a coach. He also reminds us that in junior sports, the result is not what reads on the scoreboard.
“Hockey is no different from school. Juniors join to hockey school. Rehearsals are lessons and games like school exams. If teaching and learning are done according to plan, the scoreboard will inevitably start to change in a positive direction in the future. ”
The coach’s job is now past, but he still greatly enjoys the sport and the atmosphere of the ice rink.
“I have my dream job. I treat my work with ambition and love. I want to make things easy for the customers and guarantee quality. ”